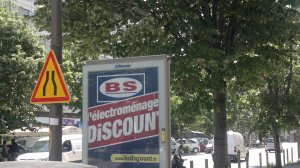 Some one really wasn’t thinking when it came to naming this store. Who wants to actually go some where to get BS’d. At least they give you a discount on it.

The day after we arrived I went to the hotel office to get the password for the internet and new batteries for the remote so we had heat and TV. I wanted to also tell them that a rental car was going to come and pick us up at 9am. I went to the office at 8:30 and was told by some guy outside the office, that it was closed until 10:30am that day (office hours are suppose to be 8:00am to noon and then 2pm until 7pm). Mind you, in the time I have been there no person has ever been in the office before 10am! Anyway, the guy gave me the batteries so that I could have TV and heat, but said that the secretary was the only one who could give me the password so that I could get on line. (I also did not have a phone at this time). The guy told me he would watch for the car rental. Well time passed and no car showed up. It was now 11am and I went back to the office. The lady was not there even though she was suppose to be there at 10:30am. There was another guy there who said he never saw a car. I asked if I could use the office phone. Well guess what! The office phone didn’t work. Apparently France Telecom went on strike as well and they decided to shut down lines in certain areas and my hotel was in the unlucky area. So still no phone. The nice man let me use his cell phone to call my colleague. I let her know what happened with the car so she called the car rental place and then called me back on the nice man’s phone. They argued for a while (that was hilarious) and then I talked to her and she said the car rental people were coming back to get us.  They showed up about 15 minutes later and the guy in the car (I will call him Jacques) started to argue with the nice man at the hotel whose phone I had borrowed. Apparently the car rental did show up at 9am like they were suppose to, but no one told them to go to my room since the office was closed when it should have been opened! So we leave with Jacques in our microscopic car and go to the rental agency. Since this agency is small and in La Ciotat and not Marseille, we now have to pay more for the car rental than we would have if our train was on time! Nice. At the car rental agency Michael’s credit card wouldn’t work because Chase thought that his card had been stolen. That was fixed pretty quickly and we were on a way. WOW, we got 1 thing accomplished!

When getting to the office I learned from my colleague that she was at a meeting that morning and guess who was there with her?? The secretary of the hotel office. That is why she wasn’t at the hotel office and instead of some one there to take her place they just closed the office and no one told me my car was there! Beautiful… That night we found out that we still didn’t have any heat in the hotel.