Fieldtrip To The Dump

Well, I got to take a trip to the Déchèterie(otherwise known as the local dump) to get rid of the junk the owners left in the house. I was not too happy about this since the one in the town we live in is just disgusting! There is trash and junk all over the place, it is completely disorganized, it smells something awful and if it is closed, people just go by and dump their junk on the side of the road!

So, when Dude said we were going I was not too happy. Protest time! Unfortunately, he was my ride back home so I had no choice. It was getting pretty late in the day and I was uncertain we were going to make in time so Dude was driving like a maniac! It was actually quite scary in the Europcar rental we had because that thing feels a little unstable. Not only that, but you can only get insurance for it for a grand! What are they gonna be able to fix on it for a grand? A big, fat, nothing is what. Can you imagine! You ding that thing or total it and you pay everything! What a rip off.

So there we were cruising towards home (me freaking out) and we passed by a local town with a sign for the Déchèterie. Bingo, down the little road we went. We actually passed it and had to turn around. You wanna know why?? Cuz it was actually a pretty nice place! Dang, this town had it going on.

We drove in and it was all organized and laid out nicely. They had all these different bins and you got to drive up, get out of your car and sort everything. They not only had the small bins for bottles, cans, paper and clothes, but these huge bins for glass, wood, metal, roofing materials, and an area for appliances.

We got out and ask the nice dump man what we were supposed to do with all the junk we had in the back of the van. He took a look and said it went into the bin entitled “Encombrants”. The reason was that our items were a mixture of material, wood, filling, nails and a bunch of other stuff. Due to this it all went into a big bin and was crushed up and then incinerated.

He explained that all other things at the dump in the big bins would be recycled and made into something new. Wow, a fieldtrip with a real lesson involved. Dude and dump man unloaded everything from the back of the van and then the nice dump man let us watch as all the items were thrown into the encombrants bin. Then he hit the magic switch. It was actually really cool to see. All the items were pushed together and crushed up into tiny pieces then sent off to the incinerator. Man, somebody used to love that stuff and now it was just dust particles. Really makes you think, doesn’t it……..okay, not really.

Then dump man looked at me real serious like (cuz I was hanging over the side railing really into it) and told me not to fall in. Duh?? I just smile and looked down in that bin and wondered how he knew what I was thinking. Cuz ya know, this remodel might just drive me to it!

Then, just like that, the show was over. We thanked the guy for the lesson and for letting us watch what he did all day at work. He was super nice and all so I will be fine if we have to go back again to get rid of more junk.

On our way out, I noticed that the back wall of the dump was one of the walls that bordered the village cemetery. I said to Dude, “Well that’s kind of sad isn’t it, that the dump is right next to loved ones?” Then he says, “Yup, you can get rid of your spouse and all your crap at the same time!”

Thanks Dude, glad to know you care. 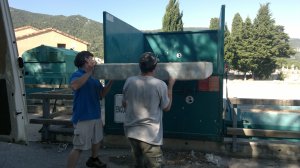 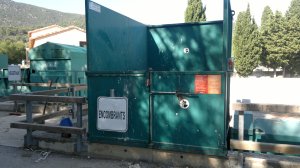 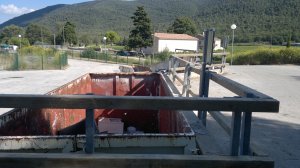