The second day of the remodel turned out to be harder than the first one. We started by assessing the house and deciding what to tackle first, the glue on the floor or the glue and paper on the wall.

In the end, we decided it was gonna be to get the glue up off of the floor. Dude said it would be best to just start scraping it, so he set out to do just that. He sported his knee pads, his goggles and his breather and got to work using a crowbar. Check out my man at work.

After a couple of hours of this, it was just not happening. The glue was too stubborn to be scraped up. We had done some research the night before (just in case) and found that pouring boiling water over the glue would help break it up and we would then be able to scrape it off easier. Well, in any case, the person said it has worked for them, might as well give it a go, ourselves.

Luckily for us, the owners left their old stove (which we hadn’t tossed out the window yet) so I set to boiling some water.  We got some towels, I put on my own mask (which is not nearly as cool as Dude’s), and I found another scraper so I could “try” and be of some assistance.

I brought up the boiling water and Dude started pouring. We let it soak in so that it would possibly break apart the glue particles and we could just run the scraper over it and viola, easy as pie. Right?? That was a big, fat, WRONG! It didn’t work in the least bit. The water just ran right over the top and then dried up, cuz it’s so dang hot here. Even with a little wetness on the glue it wasn’t any easier to get up.

We then decided that this was maybe glue that liked cold water instead. I went back downstairs and filled a bucket with cold water and we tried that. No go, as well. Apparently this glue doesn’t like any type of water. We now had to think of something else. Dude decided that we would go by LeRoy-Merlin the next day and try to find something there that would help us out. In any case, we were out of commission with the floors today so we moved onto the kitchen and the removal of the glue and paper on the walls. With this, Dude is a bit of an expert because he actually has done this before. I had him do a little Tool Time video to tell you guys all about it. Look what a natural he is. Tim Allen’s got nothing on you babe 🙂

Guess what?? We got right to it and it actually worked. I knew I had that man around for a reason 🙂 The outside wall that Dude started on was the hardest. I don’t know if it is because it is an exterior wall and with the sun beating on it all day the glue adhered to his better or not, but it took a great deal of time to get that one done. The inner walls seemed to go much quicker and I got to the point of being able to peel large strips of the paper of after wetting it and then Dude came by with the scraper and finished it off. We were able to finish ¾ of the kitchen that day, which was more than I thought we would.

Dude said he thought that we would have finished the whole kitchen so he was a little disappointed. I told him that he would have been in a better mood if he thought like me!

So we packed it in for the night and made plans to head to LeRoy’s in the morning. Next day’s objective: to finish the kitchen walls and get that dang glue off the floor.

If you want to see more photos of Day 2 remodel, they appear on Flickr in the set named “Moving and Renovation of the New House”. To get there just click on the “More Photos” option under Recent Pictures. 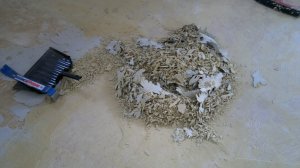 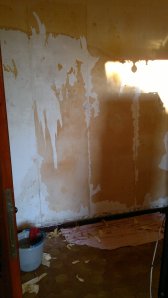 Posted on August 7, 2011, in The House of the Farmer and tagged Carpet, glue, Kitchen, LeRoy-Merlin, wallpaper. Bookmark the permalink. 2 Comments.