Today was so wonderful in Provence (weather wise) that I just had to rush home and do some house clean up outside. I mean it, too. I was so excited that the weather has been just gorgeous here that I wanted to be outside instead of inside. I made up my mind that this evening I was going to clean up the garden. I felt like I had just done this, but with fall approaching (someday soon) they leaves in the garden are beginning to pile up and it was a good excuse to be outside, but still feel like I was contributing to working on the house.

Dude decided to give up on drywall mud and finish (I suspect he needed a break from the same ol’ same ol’) and he started some much needed work in the garage. We both have been feeling like we are in the movie “Groundhog Day” since every day we work on the house and it’s always the same. So today we felt change was good.

My evening started off with opening our mail box and finding a large, black cat inside. I kid you not there he was all hunched up and looking really scared in my mail box! It seems that Dude forgot to turn the key to lock it and the cat decided it was a great place to nap. Well, you should have seen the look on the cat’s face when I opened the door. His eyes were as big as saucers and he just looked at me all dazed and scared (probably because my eyes were as big as saucers at the sight of him and probably because I screamed rather loudly when I opened the mail box). Fast as lightening, he jumped out of the box, hit the stone wall straight on and fell on the ground. Then he tried to run away, but he couldn’t get any tread (I suppose it’s because he was now brain damaged) and he just kept trying so he could get out of the yard. Finally he was able to get his footing back and off he went. By that time, I was totally cracking up at what had just happened. Never in a million years would I think to have found a cat in my mailbox! I told Dude what happened and he looked at me for a second like I was making it up then he just started laughing cuz he said he was picturing the sight of this cat not getting any tread to run off. I told Dude to please be sure that he locks the mail box next time. There’s no telling what I might find in there, if not.

After that, garden work went superbly. The evening was just wonderful and it felt so good to be outside after months of either being cooped up in the office or at the house. All the leaves and weeds were bagged up in no time and I was even impressed to find no food in the yard from my neighbors. Maybe they read my post on their bad behavior…

I then went to help Dude in the garage. He had managed to clean it out really well and started to work on getting rid of the old electrical and phone lines that had been run ages ago, like when the dinosaurs ruled the Earth. We made some new electrical and water pipe discoveries which continuously have us dumbfounded on how this house even manages to give us power and water. 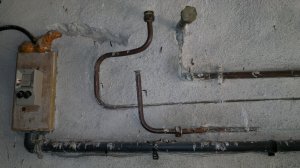 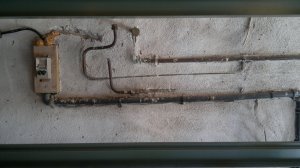 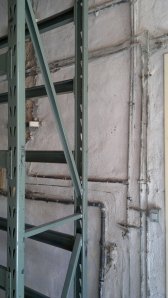 He started taking some things apart and investigating it some more and found that the main power to the house is also hooked to a piece of wood (just like our other lovely piece of “I don’t know what it is” electrical that I mentioned in another blurb of mine).

Then we took a look inside the plastic box just below it and found a hodge podge of confusion. He said he doesn’t know what the heck he is going to do with. 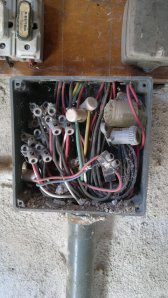 We also haven’t managed to find how the hot water tank it hooked up, yet. He really needs to run a new panel and get this place up to speed and out of the realm of fire hazard. I don’t want to have to pull this handle which tells me to do so in case of fire. Someone in this house sure thought some thing wasn’t quite right or I am sure this wouldn’t exist! 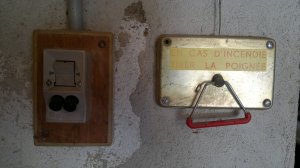 Another reason why he had to clean out the garage is that we discovered that we have these nasty little things called wormwoods and they are eating our wooden beams in the garage. This could potentially be dangerous since those beams are holding up the second story floor of the house. A couple of weeks ago he purchased this heavy duty woodworm killer liquid stuff. Today was the day he was going to conquer those pesty buggers. So right now, as I am writing, he is down there with his professional sprayer getting every inch of wooden beams possible. Now the company we bought this junk from is in the UK and they promise that if you do it right, you will be wormwood free. They had better be right. I don’t want to wake up one morning and find that my kitchen is now in the garage.

Oh, the joys of owning an old French house. Just when you think you’ve seen it all, something else pops up. I had never heard of woodworms before buying this place. I could do without the extra education. Sometimes learning new stuff is not always the best.

Hopefully I will be woodworm free in the morning. I had better go down and see how Dude is doing and possibly prepare for a short bug funeral.