I don’t know about you, but where I come from this is soooo politically incorrect.

Taking the “Special” bus is something completely not cool to say to someone but here, in France, they just out-right go and plaster it on the front of a bus!

Excuse the picture, it’s not terrific, but I ended up seeing it at the last minute while in the toll booth and was in complete shock while trying to find my camera to snap the shot before it became “the one that got away”. I just had to get whatever photo I could cuz I thought that if I told someone back home about this, they would never believe me! I swear if that was on a bus in The States, someone would be getting a lashing by Judge Judy.

Since I snapped this photo, I have seen a few other “Special” buses around town, but with an added emblem on the front of a person in a wheel-chair??!! How can this be?

I guess I’ve been too Americanized in thinking this isn’t right and it must not translate over to the French cuz guess what they also have??! A “Handiplage”! 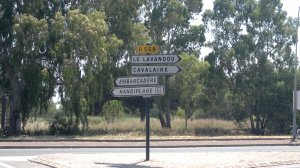 Oh my gosh! I couldn’t figure out if this was actually nice (meaning the beach is easily accessible-I sure hope they mean that) or if they were saying something else altogether. In my mind all I could think about was “separation”. There was just something about the sign that struck a nerve.

Again, I just couldn’t see having a sign that read simply “Handiplage” (Handicapped Beach). In The States, to avoid being politically incorrect at all times (thus avoiding lawsuits) one would simply have a sign reading “Beach is handicapped accessible” meaning all are welcome and the beach is easy to get to for everyone. Saying “Handiplage” to me means that there is a completely separate beach you need to go to if you are handicapped.

Every time I see this photo I always think about the fact that one would never see a sign in The States entitled “Handicapped Beach”! Something just ain’t right about this one, folks and in my mind, it never will be.

Posted in France by the Snapshot