Fuel and Scaffolding All In Three Days

We finally have fuel back in our boiler tank. It was definitely a very cold weekend without heat. After huddling in the kitchen and memorizing all the lines in the Harry Potter series and then the Star Wars trilogy due to my weekend movie marathon, I was glad when the fuel guy arrived on Monday morning. He was late, big surprise, but he did show up on the expected delivery date so I guess I can forgive him the lateness (plus he had the most gorgeous Paul Newman blue eyes ever).

He had to park his truck outside our property because it was too big to fit through the gate (same problem as the material delivery truck fiasco). No big deal for the fuel truck, though, as he had a hose that was around 40 meters in length. He was able to run the hose through our garden and into the garage and all the way back to our tank. 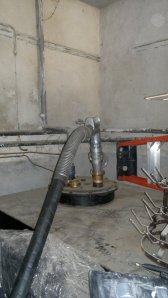 It only took about 5-10 minutes to give us the 1000 liters we ordered. We didn’t even have to move the car or any of our stuff out of the way! It was simple, easy and expensive. This is how I feel about the simple and easy part 🙂  This is how I feel about the expensive part 😦 This summer we will be working on ways to improve the efficiency of our home so that next winter we will be more prepared and try to use less fuel and be more energy efficient. I think we can do it so I’m not too worried. Even thought the fuel costs an arm and a leg, I still love my heating system! The fuel guy seemed to like it too and kept raving about our tank. He thought it was super cool. He has good taste in fuel tanks!

After the fill up, away he went with my money and away we went with turning the system back on. Heat at last, that’s always a good thing in weather like this.

That same evening while I was at work, I got a call from Mr. Right Hand Man who said that they were ready to come to my house and put up the scaffolding. He wanted to know if Tuesday morning would work. Unfortunately, ce n’etait pas bon for me and I had to tell him no, but that Wednesday would be good. I was in luck because Wednesday happened to be an okay day for him and his team, too.  Yippey, cuz Monday was the day I hit the jackpot.

This morning I got up early in anticipation for the 8:30ish arrival. Well 8:30 came and went and so did 9:00. Around 9:30 I called Mr. Right Hand Man to ask him what was happening. He didn’t answer so I left a message to please call me back and verify that the team was really showing up today.

Well, to work these guys went and they put up the scaffolding in about 3 hours. During this time Mr. Right Hand Man decided to call me back. That was nice. I let him know that his little helpers had arrived and were busy getting their work done outside in the freezing cold.

Now our house looks like this and believe me, I love it! 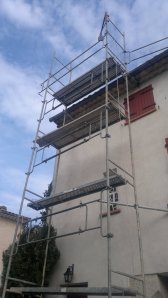 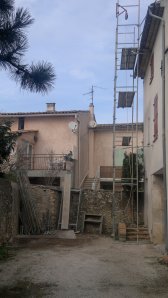 Finally, we have some positive progress to our renovation nightmare. The only thing Dude was really worried about is that they had to drill holes in the side of the house to anchor the scaffolding. That’s all we need is more holes in this place! I’m not too worried. When they take the scaffolding down, they should be able to fill those in. After all, they’ll already have the colored stucco for the façade ready to go, what’s a few more dabbles on this old place. I’m sure it will be no problem for them.

When the guys left they said that they were going to check on when the materials will be delivered and they are hoping that all will be ready for tomorrow. I guess I won’t know until tomorrow, though. One of the guys said that until all the roofing material is here, they can’t start the work because they don’t want to risk taking off the old roof and not having anything to cover it with (for who knows how long) cuz if the weather turns bad again we will be screwed. I like his logic.

So for now, all we have is a fashion accessory to our house and we have to wait and see when the progress will continue. Forward march!