← An Evening at Le Pradet
Ummm- You Missin’ Something? →

To all my blogging friends out there, I have to say that I am a bit behind.

These last few weeks have been a real struggle at work. I’ve had several projects on my plate to complete and I found out last Friday that I acquired a few more. This, coupled with another issue Dude just found with our house, has made it a whirl wind end of June.

I apologize to those out there whose blogs I read and comment on religiously. I have not forgotten about you or left you by the way side, I promise. I’m just a bit behind and hope to catch up soon, like by the end of the week!  I’ve managed to write a few posts of my own, but even that has been a struggle to find time to do. Last weekend I vowed to take it easy and just run around and see the sites. It was a much needed rest from the past weeks for me.

Now that summer is here, Dude and I were hoping to start on the bathroom remodel, but the house has other plans for us. About a week ago, Dude was doing some work in the kitchen and he found a large crack in the floor tiles that extends about half the width of the kitchen. Apparently one of the beams in the garage that is supporting the kitchen floor is giving way and now it needs to be reinforced.

He said there was a couple of ways to do it and one would be to take out the existing beam and replace it. On any other house I would be fine with that but this is one of the original beams of the house that was put in around 1776, so that would be a big NO in my book to replace.

The other idea was to reinforce the wooden beam with a metal I-beam. It would run alongside the wooden beam and then down either side of the garage. I think we will probably go with that idea, but now Dude has to start another search project for what we need, and how it’s going to be done. It also requires welding equipment which we don’t have. It’s still an idea in the works and he isn’t quite sure how it’s all going to come together but it’s something that needs to be resolved quickly. The tile in the kitchen is super nice and it will end up getting ruined since the one side of the floor has moved and actually sinks in a bit. It isn’t too bad, yet, but it will be very soon.

So there you have it. Work and house taking priority!  I still have visions of one day waking up, the house is done, and all I need to worry about is what village I’m going to sight-see in that day! It better be coming soon, but soon is probably next year 🙂

Oh, by the way, little creatures have started to visit us for the summer. We have suddenly found scorpions and centipedes in the house! That’s always nice, isn’t it??!!

This little guy wondered in one evening. His funeral was that same night. 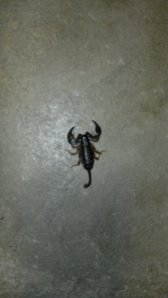 ← An Evening at Le Pradet
Ummm- You Missin’ Something? →