This past weekend we packed up and went to Arles for La Feria. This fete or “party” is probably the most important of all fetes in the region. It last for four days and consists of bullfights, food, alcohol, dancing and hanging out with family and friends. When I say four days, it means four days, non-stop since this party lasts continuously throughout the weekend.

La Feria of 2012 was the first that my family had ever been to. We were lucky enough to have been invited to it by our good friends Toni and Patrick (remember them-the angels that saved us last November when we were drowning is sewage). They live in the Camargue which is about 20 minutes from Arles and when we went to visit them a few weeks ago they invited us to go party with them over Easter weekend at La Feria.

Even though La Feria started on Friday, our first day wasn’t until Saturday. We arrived in Arles around 4pm, just in time to meet and greet Toni and Patrick and their friends and then it was off to the town center which is where all the fun happens. Everyone was on their way to the bullfight that evening, but since we didn’t have tickets for this particular event my family took the time to stroll around Arles, eat and take photos.

The day happened to be cold and rainy, but it didn’t dampen our spirits at all. The town was abuzz with people everywhere eating, drinking and partying. With as crazy as this event can get, it really is about family and friends getting together and enjoying themselves. There are so many things to do and see. For the kids there are a million different carnival rides, food galore and they even sit in on the bullfights.

During the few hours my family walked through town, I was able to snap some shots (which was a bit tough sometimes since there were so many people around). I don’t know about you, but I like to have my photos “people free” for the most part unless I want a specific photo of someone or I want to show how crowded a place is. In the case of this particular day, I was really hoping for some “people free” photos! I did get lucky for the most part so I can’t complain. 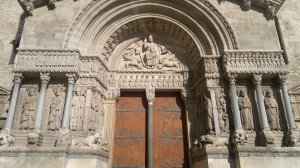 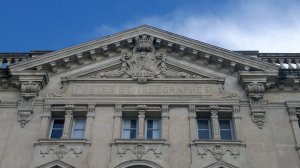 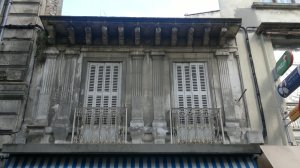 After making our way across town, we came upon all sorts of food vendors. I tell you, there wasn’t anything a person was not able to find here. There were all sorts of varieties of food and goodies to make anyone’s mouth water and the best part was that not everyone had to eat at the same place. It was one of those things were you walk up, order, and walk away eating the food! We even found a place to buy American hot dogs (whatever that means!) 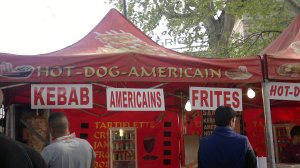 My family ended up eating some chicken sandwiches with fries on top (they love putting the fries in the sandwiches here in France) and then off we went to go and see the ruins of the ancient theatre.

The theatre was amazing and I took plenty of photos to savor the moment. It wasn’t open for visiting on this day, but you can purchase tickets to see it and take a tour. We settled for gazing at it over the fence. It is a beautiful place which was constructed around the 1st century B.C. Unfortunately for me, I couldn’t get close enough to the ruins to touch them. I wanted so badly to do so and kept trying around every corner I could, but to no avail. For those of you who have been reading my posts for a while know that I have to touch every old stone, ruin, building, etc that I possibly can. It just gives me chills to do so. I guess I will have to make it a point to go back for the tour and sneak in a quick caress of the ancient stones! 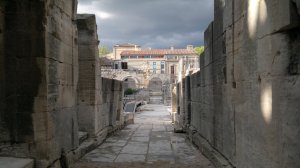 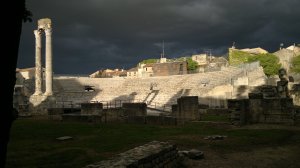 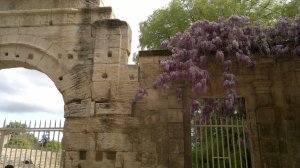 After touring around the theatre we passed by an old church which has a small court yard off to the side.

From this area you can gaze out over the city and on a clear day, even see the Cevannes Mountains. On this particular day, since it was cloudy and stormy, we didn’t get to see the Cevannes but were able to see the ruins of the castle at Beaucaire which is not far from Arles. We also met the most charming, old French man who chatted with us for about 30 minutes. That story will definitely be in an upcoming post.

After that, it was off to meet up with our friends who were exiting the bullfight. While we were waiting for some others to arrive in front of the arena, I was able to take a photo of one of the matadors exiting as well, who had been hoisted up on someone’s shoulder and paraded down the steps. The crowd was cheering and clapping so I gathered he was an excellent bullfighter and had put on a good show.

There were crowds of people waiting around the arena and I caught this guy dressed up in what I gathered as his party wig. 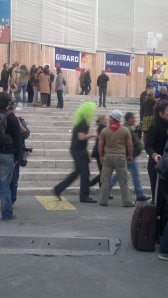 Once every one met up, it was off to a Bodega for dinner. A Bodega is a place you go in town that is normally a car garage or some kind of store throughout the year, but during La Feria they magically transform into a restaurant/bar/dance hall. It’s crazy and there were Bodegas everywhere. The one we went to had these wonderful paintings on the walls of bullfights and La Ferias in the past. They served up Sangria, bread, salads, chicken and rice and paella. I had the chicken and rice because I don’t eat any type of fish. I also abstained from the Sangria since 1) I don’t drink and 2) I was the designated driver that night. Let me tell ya, Pepsi goes just as good with chicken and rice as Sangria does so I didn’t feel all that bad.

The food was terrific, the music was very loud and very Spanish and festive. All in all the 2 plus hours we spent at the Bodega was pretty good.

Once dinner was over it was off to The Andalusia. This is an old cathedral which is transformed during La Feria into a grand dance hall. Inside are large screen televisions showing past bullfights, music and speakers set up on either end of the cathedral, lasers and lighting and posters. The floor is separated into two areas with large pieces of wood laid on the ground on which people dance the traditional dances like the Flamenco, the Tango, and the Cha Cha. They will even play Gypsy music to dance to. Everyone young and old can come and go as they please. There is no charge and people just come dressed as they are, although some do come decked out in traditional dress.  You can stand around and watch for hours while people do these traditional dances. You can even join in if you know how to do the dances. I don’t so I was content to watch everyone else and it was just wonderful! The tradition and history of the region really comes alive on this weekend every year!

Here are some of the videos I took of the dances.

After a few hours of all this fun, it was time to take our leave. It was getting pretty late and we had another busy day coming up the next day. It ended up being quite a feat to get back to our car. Around every corner and down practically every street there was a party going on. We actually got caught being herded like cattle at one point because this one area was so crowded that we could barely make it through! The music was so loud and everyone was out in the street having a great time. As we “tried” to get through and stay all together, I started to get the giggles and then couldn’t stop laughing! Then I was hopping around and dancing like a crazy person and I didn’t even have anything to drink! It was so much fun!

When we finally made it out of the city center and were heading towards our car, we happened upon two guys who were completely drunk and one had fallen down in the street! The funniest part about it was that he had an éclair that he was finishing eating and he just stayed there, laying down in the street while eating it! We were all dying laughing because he wouldn’t get up. He clearly wasn’t hurt in the least bit and he was completely happy to stay there and finish his éclair! Just like a true Frenchman, never let anything get in the way of a good dessert! Then our friend Patrick was trying to help him up and give him his jacket and then they started singing together while Patrick’s friend Christian (who by the way is a total riot and one of the most jolliest people I have ever met) started to serenade him with Patrick’s guitar! So there all of us were, myself, Dude, Tinki, our friends Toni and Patrick, their friends Christian and Claudine and these two guys in the middle of the street singing, laughing, and playing guitar. It was hilarious and we all couldn’t stop laughing. We must have been amusing ourselves for about 20 minutes or so before we could finally be on our way again towards our car. Boy, what a night.

As we headed back towards Toni and Patrick’s house, I got stopped by the “police nationale” for a breathalyzer test. Fair warning for those of you who would like to go to La Feria in the future, you must have a designated driver since every, single exit out of the city has police checkpoints ready to stop each and every car. Of course I passed with flying colors since Pepsi and water aren’t too detrimental.

When we finally arrived back at our friend’s house it was 3am! I hadn’t realized what party animals we were. Shame on Tinki and her 15 year old self for not keeping her parents in line 🙂

So off to bed we went very quickly since we were headed back to Arles the next day for some more fun. Fete, Fete, Fete!!! Oleee!!