I’m Ready To Be Done

Well, pretty much the last several days of work on our super-duper, French, country home have been taken up with trying to get the tie rods and Clee put together on the house, more framing and running the flex for the electrical, putting up insulation and then the dreaded drywall. I hate not writing, but these last few days just wouldn’t allow me any fun!

We spent an entire day and a half just drilling holes (yup-like we need more of those in this house) on either side of the third story. The tie rod is going to run next to the south facing wall in the library and in Tinki’s room with the Clee on the library side and a large bar on Tinki’s side. The walls of the house are more than two feet thick and full of cement and rock so that is the reason why it was taking so long.

Poor Dude was having the worst time with the Metabo and a 30 mm drill bit. Finally when he was able to get through the wall, the rocks were in the way and he couldn’t get the tie rod through. He just had to keep drilling away! He went back and forth from drilling, to chiseling to using the tie rod as a file, but each time he got through a little more, rocks would fall in and get wedged in the way and he would have to continue drilling. Then it would just happen all over again.

The same exact thing kept happening in Tinki’s room. For some reason we just keep getting stuck with these huge time wasting projects. Sheesh! All to save a messily 10 grand in Euros! What some of us put ourselves through just to save a buck… 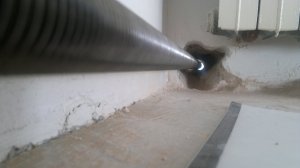 By mid day on the second day, he finally broke ground and we were able to hook all three tie rods together with large couplings. Now came the really hard part. How the heck were we going to attach the Clee to the side of the house when we didn’t have a ladder tall enough and the dang thing was more than 50 lbs of dead solid weight and was made of iron?

Welcome back to “Let’s re-enact what we saw on MacGyver!” Dude ended up tying the Clee to the end of one of the metal studs we used for framing and then hanging out the third story window and moving the Clee into place over the tie rod. I was getting weak in the knees just watching because our third story window is not a safe place to be hanging out of with the dead weight of the clee (or just hanging out of at all!). One could easily get pulled right out and that is no lie, folks! He had to wedge his feet to brace himself in the frame of the window.

Now this didn’t work the first couple of times. He really had a hard time getting the Clee to hook onto the tie rod. Then once he got it on, he had to figure out how to cut the metal stud off of it so it would hang there! I took hold of the metal stud and Dude took another one and used the long, sharp edge to cut the tie that was holding it on.

Then he used the metal stud to tape his wrench to it so he could hang out the window again and screw the nut on the tie rod so the Clee would stay on. He did that while I was over on the floor turning the tie rod to tighten it down!

What a team of crazies we are! But guess what?! It worked! It was totally stupid to hang out that window and use up two whole days to do this whole project, but we save 10 000 Euros. I’m feeling a new pair of shoes and a diamond ring coming way soon…hint, hint…

After all that, Dude mixed up some cement (it totally looks like he is playing in a big pile of poo 🙂 ) 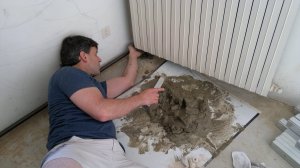 and put it on the interior side of the wall to fill up the HUGE black holes that we ended up making for this and to be sure the rod was all set in place. Goooo Team!

After the near sudden death of Dude, we continued on with the framing of the library wall and the wall in Tinki’s room to hide the Clee. I am so sick of framing! I wouldn’t want to do it for a job and get paid and here I am framing for free. Something is wrong with this picture, I tell you.

Then we were onto putting insulation up (I got lucky and didn’t have to do this because I don’t have a cool enough mask and breather for it). Dude politely said. “Get the heck outta here, cuz you can’t breathe this stuff!” So, I took up his offer to go do something else and went and ate a snack (by the way-if you see these in the market,

you gotta try ’em cuz the rock-they’re called “What Aya Nuts?!” check ’em out at www.whatayanuts.com ) and then I had a nap. This construction stuff is hard work, people, and ordering him around is super tiring.

Then it was time again for drywall. Double yucky. This takes forever, too, with all the special corners and rounded edges that are on this house. Dude had to spend a great deal of time measure and making his calculations and then drawing lines on the drywall and cutting them just right. Me, I just watched mostly and as usual, handed him his tools. Why change a great thing?

It took another three days to complete all of this. I’m really ready to move on especially since we now are only a week away from needing to move in. Man, our house is a total mess and we are nowhere near being finished.

System D is what the French do when they need something to work right or go well, but have no conventional way to do it. They just kind of…… find a way. We, in the states, would call it Mickey Mousing it.

Today, Dude and I did a System D and I am quite proud of it. While I was at work today, I accidently threw an unopened bill I received into the recycle bin. Now some of you might think, “Boy, I want to do that every time a bill comes in the mail to me!” and others are thinking, “What is so big about that? Just take it out!”

Anyway, we have this waist high box in the office made out of wood that was given to us by Beaver and you throw your recycled paper into a tiny slit in the top of the box. Once in, you can’t retrieve your stuff because the slit is too small for your hand to go through and there is a lock on the box that only the guy who comes to the office to get the recycled material has.

Problem for me cuz I need my bill back even if I don’t want it.

So what do I do? You guessed it. I yelled over to Dude to come help me fix this issue. Then our thinking caps went on.

First we grabbed a flashlight to look into the box to see if we could spot the one bill I needed amongst all the stuff I didn’t. As luck would have it, we saw it! I then tried to put my hand in the box just on the off chance it might be small enough. Didn’t happen.

So I took a quick look around the office and, as luck would have it, I had two plastic rulers on my desk. So I told Dude that we should tape the two rulers together in order to poke around in the box to find my prized bill.

I got the packing tape and did just that. Then Dude had the awesome idea to put a piece of tape on the end with the sticky side out so we could make the envelope stick to the ruler and then pull the bill out. Brilliant, I tell you.

I’m sure glad we were the only ones in the office at the time, cuz I think we looked pretty stupid all hunched over this wooden box with a flashlight and taped together rulers. But guess what! It worked! Dude was able to make the envelope stick to the tape and we pulled it right out the box! I was so excited especially after I saw who the bill was from! VIP, I tell you.

This is proof that paying attention when MacGyver is on TV is very important. I knew watching that show wasn’t a mistake.