Sunday and Monday was spent finishing the trenches. We needed to dig them a bit deeper so that when the pipe was in the ground and covered, it would be deep enough to go over with the car on a daily basis without risking the pipe cracking.

The trenching wouldn’t have been so bad except that our entire yard (and pretty much all of Provence) is entirely made of rock. We ran into rocks continuously and it really slowed our process. Both Dude and I couldn’t believe the size of rocks that were coming out of the ground. By the time we were done digging, we found enough rock to build a whole new house!

The good rocks were transported to the back of our lot and we now have a rock garden. We also found asphalt, dishes, roof tiles, a fossil and some bones. Man, the crazy stuff you find in your yard when you’re digging around!

Once the trench was to the depth that Dude thought was good, 25 centimeters on the down side by the gate, we put the pipe together and checked to see if it was level. We had to check, trench, check, trench and check and trench some more before we finally got the pipe to lie correctly so the water would flow properly. Then we wrapped the pipe is some weed barrier to stop the dirt from getting into the holes and only allow the water in. 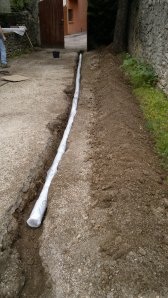 Then we proceeded to start covering everything back up.

On Monday, Dude connected the pipes together at the entrance of the gate. Since we have two pipes running parallel the length of the drive way, we needed some way to connect them so that they would eventually hook up in one spot with the pipe the city would put in.

After spending some time on that, and a few runs to the material store, the connection was complete and we proceeded to cover the remaining pipe and start to level out the terrain.

Around 3pm, two men from the building department arrived at our house. I had gone to the building department last week to have someone come out to the house from the service technique so they could see the street leading to our house. I mentioned in my last post that one of our problems was that the water can’t exit our property. There was never any drainage put into the street by the city when they made the street and also, the street is now so old and bad that all the water runs into our property instead of away from it.

We showed all of our pictures to the city workers. The ones of the flooding and the ones of the work we had done. They were very nice and surprisingly said that someone would be out to survey the street and to evaluate what needs to be done for proper drainage and water runoff. They made no promises of when the work would be done, but at least we got the ball rolling with them (that’s what Dude said).

Once they left it was back to fixing the terrain so the water would flow properly (as much as possible) in the correct directions and down the drain pipes. Dude also cemented in the drive over drain box that we put in next to where the rain gutter ends.

Now it looks like we were ready for the 10 tons of gravel to arrive! 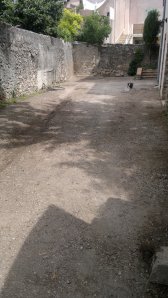 Today was the day we really got down to business digging the trenches in the yard.

First stop was to the local material store to pick up some drainage pipe. Benoit had to tough it out and help us along with getting the stuff home. Our poor car has been through the ringer since we moved to this house. He’s had to do more than Renault ever expected him to do.  As always he was a trooper and we made it home, materials and all and didn’t even get a ticket for illegal use of a car :). Good thing we only needed 4 tubes or we would have had to go back for another pickup. 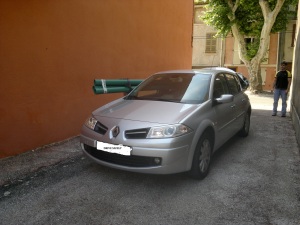 Once home, Dude and I got to work digging the trenches. We are running two of them down the sides of the yard and they are going to tie into each other and then tie into the drainage pipe that the city comes to put in.

Who knew you could do so much with these three little tools.

Dude’s job was to use the pick to break up the top layer of the drive way, turn the dirt up and get the rocks out. Then my job was taking the trenching shovel and getting all the dirt out.

While Dude was busy doing his part of the job, I went to work picking the delicious cherries off of our tree. We have so many that there is no way I will be able to get them all. Lately the birds have been stopping by to feast so I figured that we should try to get our fair share before they’re gone. I ended up picking almost half of a bucket today and that was only off of 4 branches! 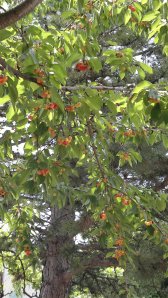 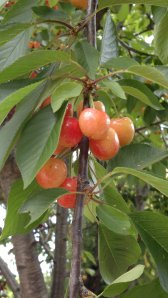 Then it was back to scooping dirt for me.

We were able to get all the trenching done today and tomorrow we just have to fine tune it and then level the driveway out. I’d say we were pretty successful. Let’s hope tomorrow our luck holds out.

Oh, and by the end of the day, Dude was done in.