← Make It Count
How Can Something Be Kind Of Mean and Funny At The Same Time? →

Day two for us at La Feria started out a bit rough. Since none of us went to sleep before 3am we had a difficult time getting up in the morning.

After several hours of moseying around the house all glassy eyed we finally all managed to get ready and take our leave.

We were headed today, first off, to the house of another friend of Toni and Patrick’s. We were all meeting for a late afternoon lunch before going to the bullfights.

We arrived at the house around 1:30pm and right away were greeted by everyone doing what I call “the bise”. This is that famous kissing the cheeks of everyone when saying hello or good-bye in France. The more people there are, the longer it takes and even longer in the Camargue region since in this region it is three bisous instead of two! After what seemed to amount to 10 minutes per person in my family, bisous dispensed, we were offered some salty snacks and drinks as appetizers. The French love their aperitif and salty snacks to get the stomach juices flowing. I was up for the salty snacks of chips, nuts and the like, but as usual, abstained from the drinks. One of the aperitifs they serve in this region is a Pastis and the French in the south are all about it. It is a very, very sweet liquor that is anise flavored and served in a small glass. Attention to those who haven’t tried it and would like to. It is about 90 proof and pulls quite a punch if you’re not use to it. Dude tried it, but decided it was not for him. It was much too sweet for his liking. I guess he doesn’t have enough French in him 🙂

We sat and conversed for a while as people continued to show up. I can’t remember how many there actually were at this party but I did quite a lot of “the bise” and the house was full. We continued to chat with both people we knew from our prior outing the night before (and from our last visit with Toni and Patrick) and we struck up conversations with people we were just meeting for the first time. The cool thing for my family is that with the exception of Toni and her son Spencer, who was in France for a visit; all conversations for the entire weekend were in French! Lucky for us only one or two of the people that Toni and Patrick know speaks English so we were forced all weekend to practice our French. Note to expats: spend a lot of time with non-English speakers. It definitely improves your French.

Well, what would be a party be if there was no music? In the Camargue, it would be dull. Every time Toni and Patrick get together with their friends it’s all about music and food. Hmmm, I could get use to this.

Patrick and his friend Jean-Claude are amazing guitar players and singers and when all the gang gets together the parties last for hours with music, singing, and food.

We also got to hear their friend Marie-Jo sing. She’s an absolutely fantastic singer and she also plays the guitar. Unfortunately, since we were at a party and there were a lot of people, conversation was going on at the same time so there are parts where it’s difficult to hear her beautiful voice. Here’s a picture of us together. 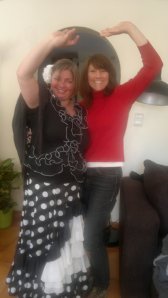 She is in a traditional dress of the region. Do I look hung over from the night before? I think I do and I didn’t even drink! I believe that for me, 3am bedtimes are no bueno.

Here she is singing.

Food was served up and it was the most delicious stuff, ever! Pasta salad, rice (not your ordinary rice, either, but all kinds of custom made rice mixed with special goodies and flavors in it), meat, lamb, bread and of course, wine. Dude ate the lamb (which had been cooked slowly for 7 hours) and said it was absolutely wonderful. Here, in the south, they keep serving up the food, too! When you’re full and don’t want anymore, they take your plate away and bring it back piled with more food. Don’t ever say no to more food at someone’s house here. It does no good. They want to be sure you are happy and feed even if you’re full to the point of bursting. It’s all a part of their wonderful “southern hospitality”.

We were suppose to leave around 4pm to get to the bullfights, but the French time schedule is quite different that the American time schedule which for the most part innerves us Americans who are very time conscience. Toni kept trying to get everyone to leave at which Patrick’s response was, “In 10 minutes.” Now is that French ten minutes, cuz in that case that’s an American’s one hour! No kidding.

Of course time moved on and about 30 minutes later we asked again, “Are we almost ready to leave?” The response this time was, “In 5 more minutes”. Wait a second. Thirty minutes ago it was stated that we were leaving in 10 minutes and now it’s another 5 ?? Tinki just looked at us and said, “It’s a different time every time you ask! How do they ever manage to get anything done around here?!” Ahh, from the mouths of babes.

It’s so true and living in the south of France you just have to get use to it. They march to the beat of a different time table and there’s nothing you can do about it. I swear no one even owns a clock here, cuz it wouldn’t do any good anyway!

Before leaving it was some final farewell dances and singing. Sheesh, life is harsh here, isn’t it?! 🙂

Of we headed to the center of Arles for our very first bullfight. We were warned ahead of time about bullfights since this was our first. For many people they can’t really stomach it so Toni and her friends warned us and asked us if we would be okay with it. Some areas were a bit crowded while others had no quite got up to speed, yet.

It was starting to get a bit crowded in front of the arena as people started to show up for the bullfight.

Here’s Patrick as we entered the arena. Oleeee!

Here are some of the photos of the bullfight. I didn’t take any of the actual killing of the bull since I don’t think that’s photo worthy for me, but the interaction between the bull and the matador was interesting to see. In my next post, about our third day in Arles, I will have more info on the bullfights and my ideas and thoughts about the sport. 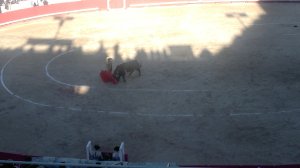 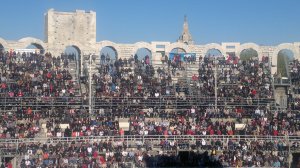 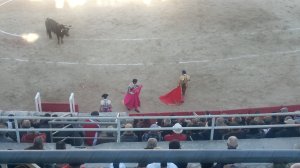 All together we saw 4 bullfights on this day. There were 6 scheduled but we missed the first two thanks to the “French 15 minutes which is really and hour” time frame. It turned out fine for us, though, since I think 4 was enough. Tinki didn’t come with us to the bullfight. She went off with Spencer and Patrick’s daughter Celia into town. We met up with them later.

Around 8:30ish the bullfight was over and we headed out of the arena to meet up with some of Toni and Patrick’s friends and the kids. We headed off to take a look at the entertainment for the kiddies. 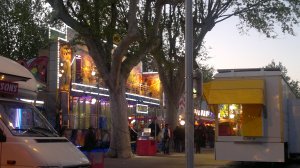 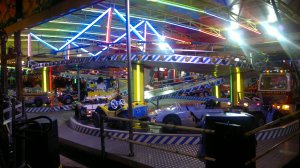 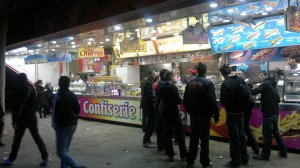 Tinki tried her hand at shooting balloons and actually won herself a little stuffed animal.

Then she decided that was such tough work that she needed a waffle with a ton of Chantilly (whipped cream) on top.

Patrick opted for the mother of all mother’s with a giant sized cotton candy (Barbe de Papa as they call it in French). 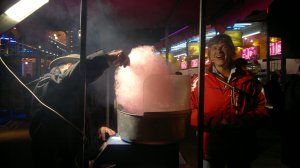 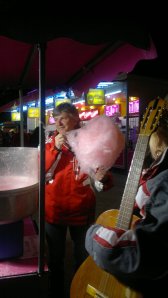 After walking through town, off we went to go find some food. Don’t you just love how we have dessert BEFORE the food! We tried to make it to another Bodega or restaurant, but unfortunately every place we looked at or tried was full. We settled on a little hole-in-the-wall place that served Turkish food. Tinki and I had a chicken sandwich drenched in onions, lettuce, tomatoes and mayo with, of course, the fries INSIDE the sandwich (I’ll never get over that). Dude had an omelet with eggs, lettuce, tomatoes all wrapped in a crepe with, you got it, fries inside! Too funny. Everything was super delicious and we just stood on the side of the street munching away and people watching.

After our meal, we took off once more to the Andalusia (remember this place from my last post). It’s the cathedral turned into a dance hall. We wanted to check out the dances this night and also get involved in some of the action.

Here are some kids enjoying the dancing.

We watched for a while and then Toni, Patrick, myself, Dude, Marie-Jo and her friend all jumped on the dance floor and boy oh boy did we have fun. Unfortunately, I don’t have any photos or videos of us dancing CUZ we were all dancing!

We left just before midnight. We had an early start the next day so Toni and I vowed that we wouldn’t stay out as late as we did the night before. Off we went back towards their house and past a few police checkpoints. On this night, I actually had to go through two of them. The first time around the police officer asked me if I had anything to drink. Since I said no, truthfully, he let me pass sans breathalyzer test. The second checkpoint proved not to be so lucky for me. They made me take the test but I passed with flying colors. See, I said I told the first guy truthfully. Apparently he didn’t call his buddy up ahead to tell them that I was an honest person.

Finally we made it home around 12:30am-ish and off to bed I went. Tomorrow was going to be another busy day. Fete, Fete, Fete….Oleee!

← Make It Count
How Can Something Be Kind Of Mean and Funny At The Same Time? →